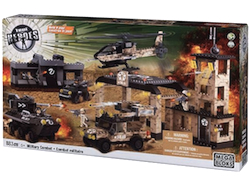 There’s no point in winning a battle but losing a war. When you play True Heroes with your child, it doesn’t matter if you win or lose this military game. You’ll definitely be winning your children’s hearts as you role-play with them.

Remember how we used to make-believe military battles with green plastic soldiers? Toys ‘R’ Us Singapore have recently brought in a grander version of the game. The True Heroes by Mega Bloks series will turn your living room into an impressive battlefield.

Sets that are currently available on our shores include:

To add to the realism, get your children to memorize related military quotes, and use them as they play. Some examples,

Who knows, perhaps they’ll internalize these quotes and use them to encourage themselves when school exams are around the corner?