If there was anything to sum up this year’s conference held on 20th October, is that it was run like a well-oiled machine and there was praise all round, despite the unforeseen circumstance where celebrity dad – the multi-award winning Malaysian actor, Datuk Jalaluddin Hasan – was unable to attend the programme at the last minute.

“I cannot believe that for the location, the food and content of conference, my husband and I only had to pay $10 each! It is great! Perhaps it is to make such conferences more accessible to the lower income group,” Mdm Siti Awalliah Md Amin, 35 and mother of two young children.

Teacher Mdm Siti Awalliah could have come to such a conclusion after listening to Dr Maliki Osman’s passionate plea to the Malay community to rise up to today’s challenges and grab the opportunities available in honouring the God-given trust of being the leader and the main breadwinner of the family.

Among other points, Guest of Honour, Dr Maliki Osman, made out a passionate plea to the community in his keynote speech

The Minister of State for and National Development, Mayor of South East District, and Member of Parliament for East Coast, Dr Maliki Osman, stressed the importance of Malay fathers adopting a positive and winning attitude in order to provide a financially stable family.

He highlighted that Malay males make up a third of the cases he attends to as Mayor of the South East CDC. Out of that, two thirds are unemployed between the ages of 30-49 and 60% of them have dependents. He was worried as that is the age where their careers should have already stabilised and thus, financially secure to raise a family.

Dr Maliki also highlighted the need to aspire for more as some men are too easily contented. Out of the unemployed males who eventually got jobs, only 21% attended any Government training or upgrading courses.

He provided the example of Mr Abdul Hamid Abdul Razak who understood today’s challenges and saw the need to upgrade himself. He grabbed the opportunities available for him and now enjoys a monthly salary of more than $2000 as a security executive after his diploma in security as opposed to his initial $800 as a security guard.

“The easy way work out is to get a government hand-out, but he chose to work hard. So can you and so can the community.”

Dr Maliki also mentioned that the Government high encourages families to attain greater work-life balance and outlined some of the pro-family leave schemes made available for dads to become more involved in their children’s lives.

Dr Maliki stressed and concluded his speech with, “It is not easy to become a father but it is a responsibility we take on when we decide to marry and have children.” 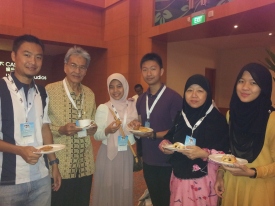 Mr Ibrahim (second from left) and his family enjoying breakfast before the conference. One of his sons, Mr Suffendi, 33, had suggested attending this conference as a family outing.

This was precisely what Mr Ibrahim Hj Abdul Hamid, 65, knew years ago when he decided to marry Mdm Supiah Abdullah, 55, years ago.

“We both had to work hard to raise a young family. I took the kids to the market and cleaned the fridge over the weekends while my wife does her shift at the hospital. It’s about my responsibility towards the family. Those are not unmanly tasks,” said Mr Ibrahim.

All the sacrifices he took on many years ago such as typing out notes for his children on the typewriter and recycling assessment books have borne fruit — 4 out of their 5 children are graduates.

On the other spectrum, yet to be parent, 37 year old Mr Shahri Rahamat couldn not agree more with Dr Mailiki’s words.

Mr Shahri added, “Parents do play an important part in a child’s life. My dad passed away during my PSLE and my mum neglected me. Growing up unchecked, I drifted to the dark side.”

Mr Shahri was recently promoted from the delivery team to sales team. And determined to change for the better, he plans to take up Dr Maliki Osman’s challenge to continuously improve on himself and provide a happy home for his family. Mr Shahri attended the conference as part of improving himself. “I had reservations when my wife, Aisah, asked me to join her for this event because of my tattoos but I came anyway because I really wanted to learn and I have not regretted my decision.”

Incidentally, Mr Shahri’s photo with his wife’s nieces, Nur Adilah 5 and Nur Auni, 4 was voted the winner for the “Cool Dad” photo competition. The couple have been playing weekend/getaway surrogate parents to Adilah and Auni as they currently live with Aisah’s brother’s family and are still trying to have children of their own.

Mdm Aisah Latif, 35, commented,” My brother works long shifts and is hardly at home for my nieces. When we have children to call our own, I don’t want them to have an absent dad.”

There are many definitions linking it to ones behaviour or state of being ranging from fun to be with yet still commanding his children’s respect to being fashionable, or having an interesting facial expression, style of walking or talking.

Generally, Khair outlined that it has a good connotation and defined a cool dad as one who has excellent character, protects, leads, loves and celebrates his children.

He cautioned dads from equating loving to giving only material things. This was reiterated later by Mr Zainudin Ali that “It is not your presents but your presence that is important.”

Mr Khair concluded that being a cool dad is not about following a fad but a continuous effort to becoming an effective dad.

An avid follower of Mr Khair’s seminars and workshops are couple, Mr Zainal Arifin Ahmad Bakri, 41 and wife, Mdm Siti Norshiela Mohamed, 40 who have been married for 17 years and have 3 girls – Syafiah Aniqah, 16, Syaza Anisah, 15 and Salihah Aisyah, 5 agreed when he said that all teenagers present the same challenge to parents.

“We have 2 teenage girls who go to a madrasah or religious school but they still enjoy K-pop and are exposed to the same things. What we try to do is give them the ground rules yet give them the leeway to make their own choices,” said the couple.

This is evident when cool dad, Mr Zainal takes his girls to his band practice when they jam at the studios and allowed his girls to take up the Malay martial art, silat and archery, activities typically linked with boys.

Ustaz Badlishah is a well-known and well sought-after motivational speaker in Malaysia and Singapore. He is currently a Senior Assistant Director of the Research Division of the Pahang Islamic Religious Department. 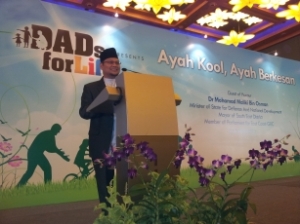 The audience was treated to Ustaz’s casual and funny comparison of parenting in yesteryears and parenting today. Parents need to be aware that it is a different landscape now and must follow the times without losing sight of some of the traditional ways of parenting that uses effective psychology, namely “if you that, your mother will die”. This is followed by a roar of laughter from the floor.

While he agreed that dads should play it cool these days by sparing the rod as opposed to “pukul” (pronounced as “pu-cool” to mean using the rod) to be an effective dad sometimes requires dads to be assertive. e gave the example of the teachings of the Prophet Muhammad as to when the rod is allowed and reminded the audience of the English saying, “spare the rod, spoil the child”.

His stance on a strict upbringing is shared by Mr Zainudin Ali, an ex-teacher. Mr Zainudin and his wife, also a retired teacher, successfully brought up 6 children to achieve academic excellence and 5 of his children became doctors.

Sharing Session by an Ex-Discipline Master

Mr Zainudin Ali and his wife, both retired teachers, have successfully brought up 6 children who excelled academically. In fact, five of them are now doctors.

Sharing Mr Ustaz’s belief in a strict upbringing, his stand is that in raising children, “…there is no such thing as ‘complete democracy’ but rather ‘guided democracy’ and parents must have aspirations for their children right from a young age” because, “it’s for your own good”.

Driving home the point for parents not to argue in front of children, Mr Zainudin shared his observation as a teacher that many children in disharmonious family environments adopt the attitude of “My parents can’t even settle their own problems and they want to settle mine?”

Truly, Mr Zainudin methods have worked his children and we hope that more Malay families, especially those who have benefited from all the parenting tips and sharing in this conference will grow happy and more harmonious family environments for their children to thrive.

For more information on the speakers, please click here.

About the Author: The Dads for Life Resource Team comprises local content writers and experts, including psychologists, counsellors, educators and social service professionals, dedicated to developing useful resources for dads.